So says Dave Grohl, the Nicest Man In Rock. Loaded invaded Foo Fighters HQ to find out if he's really that nice after all.

Loaded are ensconced in Northridge, California, deep in the San Fernando Valley, where we've made it into Studio 606, HQ to one of the world's biggest bands: Dave Grohl's Foo Fighters. Pinball machines line one side of a huge room that doubles up as the band's office. Through the double doors, there's a walk-through with Platinum discs, and a 'Foo Fighters Ave' road sign covers the walls. Then there is their studio, which is presided over by a painting of Dave. Befitting the Nicest Man In Rock, it's typically low key. He's caught sat on a leather armchair, dressed in a red smoking jacket, whiskey in one hand and cigar in the other.
"But see that small room at the back?" asks Dave, pointing to what might be described as the 'box room' of Studio 606, where the band's instruments are set up for action. "That's the rehearsal room." We resist the temptation to start pounding a drum kit owned by the former Nirvana sticksman and take in the inner sanctum of this 15 million-plus selling band. "That is the very heart of this band," he says.
"Wembley Stadium, Milton Keynes, Reading Festival. It loesn't matter how big the show is or to how many thousands of people we are set to play to. Every show starts right there." But for their newest album, Wasting Light, the band decamped to their leader's own house, moving in for weeks on end as they recorded their seventh record in Dave's garage, so a rock god's garage might boast a few square metres more than the space us civilians have in one's own shit heap, but it still marked a back-to-basics approach for them.
"It was nice being at home," says Dave. "We had a ball. This album should really be labelled 'Made By Foo Fighters And Their Fam'. It was a family affair. I had my wife and my daughters around while everyone else brought their kids too. Whoever said work and pleasure don't mix, was wrong."
Decked out exclusively in black, with his hair down to his shoulders and the proud owner of an unruly beard.-, you're reminded that Grohl's still the real 'ho was '.;-. Nirvana deal. Despite maintaining a veiy un-rock 'n' roll barrage of eight years and fathering two young daughters, he's not gone soft. In fact, Wasting Light is the Foos at their heaviest. Pure, unadulterated, fierce rock.
Dave explains, smiling his famous mad-man grin: "When Bono said rock 'n' roll was dead - he was wrong! We've never been a techno band, we've never been a rap band. We've always done what comes totally natural to us, and that's writing simple rock songs that have lyrics that mean something and catchy melodies. That's just what we do. It's just that on this album things got a lot louder."
It's been 16 years since Foo Fighters emerged from the ashes of Nirvana, that little grunge outfit Dave joined as their fifth drummer. He formed the Foos as an outlet for the songs he'd written secretly in his spare time while he was in Nirvana, being too intimidated by Kurt Cobain's talents to give them a public airing.
He never initially intended to even release anything, or if he did, they were planned to be released anonymously. He certainly didn't intend for the band to still be here. "Or that we'd still be here playing our very best," he adds. "Kurt was a huge inspiration and his death affected me badly. I always remember how lucky I am that I got this far and Kurt never did. It still hurts." 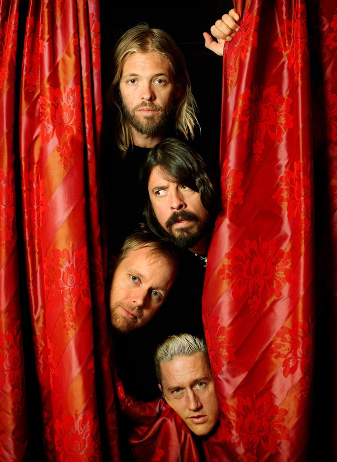 Blast From The Past
Wasting Light is a particularly important and poignant record for Grohl, as it sees him reunited with producer Butch Vig, the man who helmed Nirvana's seminal Nevermind. "And I guess that's why we decided to make the album on tape rather than computers, as that's how we'd made Nevermind" explains Dave. "Butch is a genius when it comes to Pro Tools. He's great at sequencing and looping and is a real high-tech producer - but he hadn't made a record to tape in years and years, and that to me just seemed like a good idea. It kept it really simple and fun."
Butch isn't the only link to Nirvana found on the new album, as bass player Krist Novoselic plays on the track 'I Should Have Known'. Suddenly Dave beams into life: "It was a pretty exciting time for me being back with Butch and getting Krist over at the same time," he says. "It was a special moment, the hairs stood up on the back of my neck When there's more than just a musical connection, it makes the music better. It happened on that song and it happens all the time with Foo Fighters.
"You think I'd feel comfortable walking on stage with four fucking dudes that I don't even know? No, I'd be scared shitless. But walking on stage with my best friends - now that's a blast."

Conquering Hollywood
Aside from re-conquering the rock world with Wasting Light, the Foos are mounting a bid for silver screen domination with their first film. Foo Fighters: Back And Forth documents the band's myriad peaks and troughs of the band's existence, beginning with an honest account of how Cobain's death tortured Grohl, to the guilt of sacking members en route (original drummer William Goldsmith and second guitarist Franz Stahl were booted out), right up to the present day with Nirvana touring guitarist and original Foos member Pat Smear returning as an official member for the first time since their 1997 album, The Colour And The Shape.
Dave laughs: "The band invited Pat back for the acoustic tour in 2006 and after he just kind of squatted. He stayed for so long that he had squatter's rights, and we were like: 'Alright, you live here now?
"The film has been a great thing for us to do though I only intended it to be a documentary about the making of the album at first. It's such a special record for us that I thought it would be good to have footage of us making it at my house and on tape with Butch. But then it turned into something much bigger. But there are some uncomfortable moments in there for all of us."
Does Dave see the film as a form of therapy? It does see the band confronting issues that they've never spoken up about. Drummer Taylor Hawkins' near-fatal overdose in 2OOO, for example. And guitarist Chris Shiflett's fear of being booted out if Pat should ever rejoin...
"Yes, its fucking true," nods Dave. "The film has been therapy, but that's as far as this band goes with things like that. Therapy kills bands. I know bands who have seen therapists and then they fucking break up. And we're no where near ready for quitting."
Just as well considering the band's summer schedule.

Monster Gigs
July 2011 sees the Foo Fighters juggernaught rolling into glamorous Milton Keynes for two monster gigs.
"One. Hundred. And. Thirty. Thousand. Fucking. People," cries Dave, his eyes widening as he spells out the huge number. And it is a huge number, even for the Foo Fighters. "I'm terrified! I love playing both the big shows and the small tiny clubs. We're lucky that we are a band who can pull off both.
"When you play a big place like Wembley Stadium or Milton Keynes, the applause takes about two seconds to get to you. Whereas when we're playing at a club, you have this uncomfortable silence in between songs where I'm telling fart jokes. They're both equally cool."

back to the features index